Bollywood diva Kareena Kapoor is currently under isolation as she tested positive for COVID-19 about two weeks ago. The actor has been penning down her thoughts and sharing them via Instagram stories during these difficult times. She recently wrote her heart out as she could not figure out if the world is again under COVID times or not and also shared a health update.

Taking to her Instagram stories, Kareena Kapoor recently penned her thought of Day 12. The actor wrote how she is in a dilemma if the word is again under COVID-19 times or not. She wrote, “I’m still trying to figure out if we are in COVID times or not… anyway, day 12… two days to go.” The actor further asked all her followers to stay safe amid the pandemic. 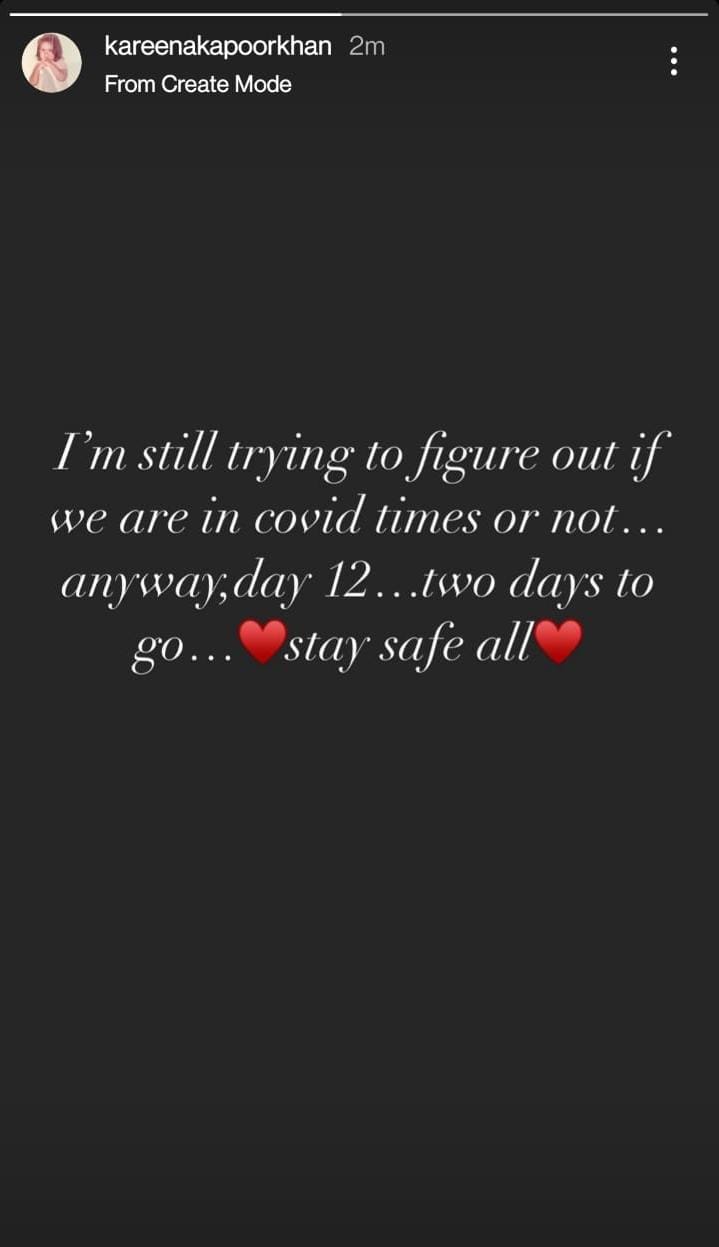 Kareena Kapoor Khan and her best friend Amrita Arora both tested positive for COVID-19 on December 13, 2021. The two attended an intimate dinner party a few days before. Soon after contracting the virus, the actor’s official spokesperson released a statement and mentioned the dinner party was a small gathering and it was only one unwell person who passed on the virus. The statement read,

“Kareena has been extremely responsible throughout the lockdown period. She has been careful every time she’s stepped out. Unfortunately, this time she and Amrita Arora contracted covid at an intimate dinner where a few friends had gathered to catch up. It wasn’t a big party as being reported. Among that group, there was one person who seemed unwell and was coughing, and who eventually passed it on. This person should have been responsible enough to not attend the dinner and put others at risk.

As soon as she tested positive she has quarantined herself and is following the necessary precautions and protocols to deal with the condition. It is not fair to put the blame on her and say that she has been irresponsible and let her guards down. Kareena is a responsible citizen and also has the concern and care for safeguarding her family.”

On the same day, Kareena herself informed her followers via Instagram. In her IG story, she mentioned she immediately isolated herself and began following all medical protocols. The actor asserted her entire family and staff have been double vaccinated and mentioned she was asymptomatic and was feeling alright,

Actress Kareena Kapoor Khan took to Instagram Live with filmmaker Karan Johar on Monday and launched her debut book Kareena Kapoor Khan’s Pregnancy Bible online. During the introduction of her book, Kareena spoke about several of her personal experiences with pregnancy, including how her second pregnancy was more difficult than it was with her first son Taimur Ali Khan.
In other news, on the work front, Kareena is now venturing into film production with Ekta Kapoor’s Balaji Telefilms for Hansal Mehta’s upcoming thriller. She was last seen in Angrezi medium opposite Irrfan Khan and Radhika Madan. In 2019, Kareena was seen in the comedy film Good Newwz, where shared the screen with Akshay Kumar, Diljit Dosanjh and Kiara Advani.
Kareena is all set to return to the big screen with Laal Singh Chaddha opposite Aamir Khan and Vijay Sethupathi. The film is directed by Advait Chandan and is expected to be released in December 2021. The film is an adaptation of the 1994 Forrest Gump, which starred Tom Hanks. Kareena will be sharing the screen with Aamir Khan for the first time since 3 Idiots.
MAKE SURE YOU FOLLOW US FOR THE LATEST UPDATES FROM BOLLYWOOD
Click here to Subscribe to Celebmantra’s YouTube Channel
https://www.youtube.com/channel/UCsZ6LWr_UjFvJRTdN5j1BgA
LIKE Celebmantra’s Page on Facebook:
https://www.facebook.com/celebmantraofficial
Follow Celebmantra’s Page on Twitter:
https://twitter.com/Celeb_mantra
Follow Celebmantra’s Page on Instagram
https://www.instagram.com/celebmantraofficial/
KareenaKapoorKhan Launch Bollywood KaranJoharBooklaunch Instagram Instagramlive Taimur SaifAliKhan SaraAliKhan Jeh JehangirAliKhan TaimurAliKhan Shershaah IGTV